Take some some time to get to know us before your first appointment.

Dr. Jason D. McDonald, DC MS
​Chiropractic Physician
​Dr. Jason didn't grow up with expectations of becoming a chiropractor but rather the experiences throughout his life have brought him to the crossroads of becoming a chiropractic physician. Dr Jason was born and raised in Las Vegas, NV and spent most of his unmarried life there. After graduating from the old Las Vegas High School, Dr. Jason served a mission for the Church of Jesus Christ of Latter-Day Saints in New York City. The experiences gained at that time have forever shaped how he views others and the world.

Not long after returning home from his mission, Dr Jason met Kristin and after a lengthy engagement were married in Las Vegas. It wasn't long after being married that their first daughter, Katelynd, was born. Their second daughter, Lindsay, decided to join the party 13 months later. With all the female drama in the house, Dr Jason welcomed his only boy, Jacob, hoping to even the score, but to no avail because Lauren, their youngest, kept the boys outnumbered two to one.

The McDonald's are Desert Rats by heart so when Dr Jason was accepted to Logan College of Chiropractic, now Logan University, the whole family had to make big changes and move to Missouri for the duration of the doctorate program. The McDonald's made many friends in Missouri and had intense experiences that shaped their lives. After graduation, the McDonald's moved to Queen Creek in 2013 to establish themselves in the explosive east valley.

​When it comes to describing the world today, Dr Jason readily quotes a Luke Bryan song by saying " I believe most people are good!" 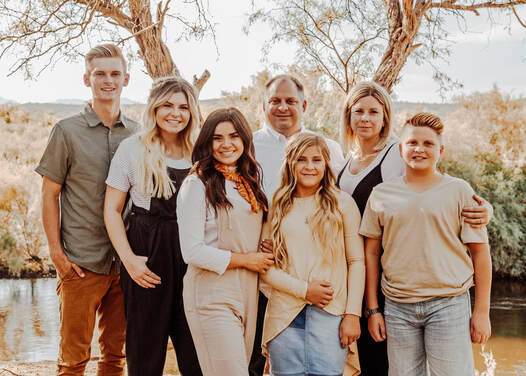